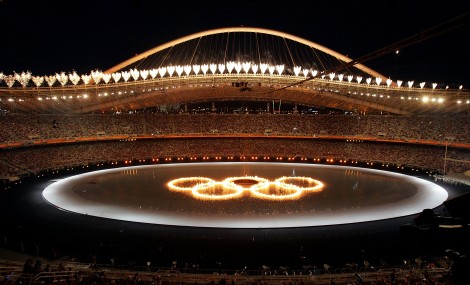 I watched the London Olympics opening ceremonies last night at my friend Jon Davis’ house. He grilled some pork loins and we scarfed chips and salsa and drank beer. And then we watched sports pageantry without the sports.

That sounds like the complaint of a grumpy sports dork. But I loved it. I loved watching an art form that has no normal venue in life. It was the Super Bowl halftime show without the constraints of the length of a halftime. And it was a time when athletes could be unabashedly happy to be there. That might have been the best part — watching nations march into the stadium. I especially enjoyed seeing the small nations that I had almost never heard of enter the stadium as a group of maybe five athletes and their coaches. We live in an unbalanced world. But in that moment, there was a degree of equality. Every country came through the same door and waved to the same number of adoring Olympic fans. Whoever wins and loses in the next 16 days, that moment was the same for everyone.

I ended up watching almost all of the four-plus hours of coverage, culminating with Paul McCartney singing “Hey, Jude.” And though it’s probably the 4,986th time I’ve heard “Hey, Jude,” it just might have been my favorite version. I loved watching a group of blonde, female U.S. Olympians swaying arm-in-arm and singing along. I don’t know what sport they play, but they’re my new favorite Olympic athletes.

However, I did leave Jon’s house a bit early because the Rangers were behind by a run against the White Sox going into the late innings. I needed to flip between actual sports and sports pageantry.

Here are a couple of other things I think about the Olympics:

If you enjoy reading The Live Ball, you might also enjoy my books "In the Burn" and "The Untold Story of Smokey Duran."